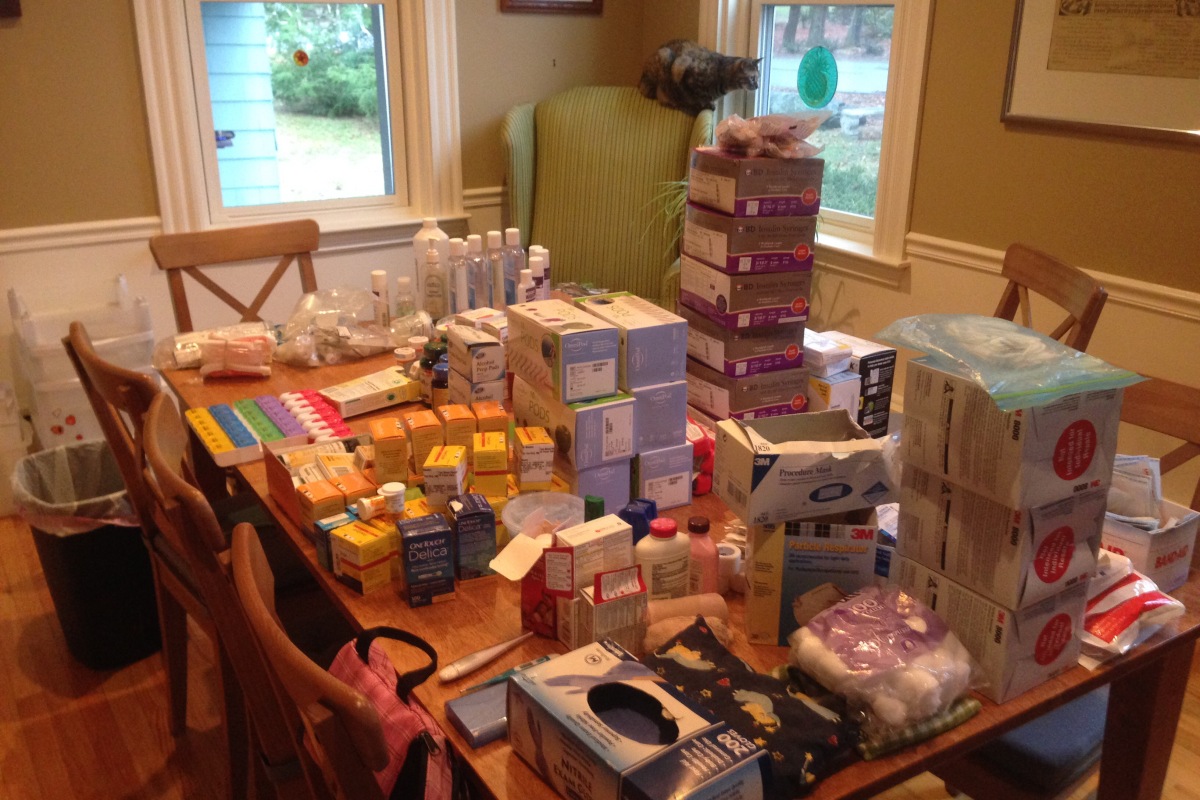 We went in to the hospital with a child who at the age of three was already potty trained, swam in the pool without a flotation device, and was so active, she probably could have been considered hyperactive.Eight weeks later we were discharged with a child who was an insulin dependent diabetic, with high blood pressure, and a long list of dietary restrictions, who needed medicine a few times daily, and who had to have her blood sugar monitored, food measured, carbs counted, and insulin given.  She had trouble walking and eating.

While in the hospital,  I had learned how to take her blood pressure, how to give insulin shots into an orange, and what medicines she needed.  But I was terrified that suddenly I was going to  be in charge of doing all of the things that needed to be done.  It was a whole new normal and it was totally overwhelming.  I remember wondering if I was up to the task and also knowing that I didn’t really have a choice.

That was almost nine years ago, and I can still feel the panic of the first discharge day in the pit of my stomach when I recall it.  I’ve learned a lot, which can be boiled down to just a few suggestions.

Take stock of what you need.  Just like bringing a baby home for the first time, you’re bringing home a child who needs special care.  Just like you make preparations for the new baby with diapers and onesies, wipes, and blankets, you have to be ready to take care of this sick child.    Do you have all of your medication?  Do you need to make a schedule for the medication?  My husband set up an alarm system on my tablet that beeped and told me what medication to give when.  We arranged little cups with the medication all drawn up before we went to bed with times labeled on the cup “11 pm” , “2 am”, “5 am” so we knew what medications to give at what time, even when sleep deprived and groggy.

We developed similar solutions for breakfast.  I was terrified of trying to count carbs first thing in the morning before coffee.  However, I also knew that Wendy basically ate the same 10 things for breakfast, so I wrote them down on a piece of paper with the correct carbs and taped them to the kitchen wall, so I didn’t have to keep looking up the 10 items over and over again.  After a while, I just knew them.

Determine who or what your resources are.  Is there someone in the area who has a similar situation?  For us, there was a parent’s group for diabetic kids at the doctor’s office.  We would meet once a month for lunch and talk about challenges we were encountering.  They would have good ideas from their own experiences and trials.  I’m also a member of some facebook groups for parents of kids with Wendy’s kidney condition, and I am a part of a group called STOP Foodborne Illness which gives good advice on food safety. They set me up with a buddy parent whose child had gone through a similar course with her illness and it was incredibly helpful to be able to talk with a parent who knew exactly what I was going through.

Ask for help when you need it.  We had a very specific problem:  Wendy  had diabetes and kidney damage. The diet for diabetics has a lot of protein in it, while the diet for kidney damage seeks to limit protein that has a lot of potassium (like meat).  I couldn’t figure out what to do, so  I asked Wendy’s pediatrician and she referred us to a dietitian.  Together we figured out what was the best solution for eating for Wendy.  Again lists of foods were written down and taped to the wall, so they would be easy to access when I needed them.  Neighbors found recipes on a site called DaVita that had both kidney and diabetic options, and then, bless them, they took turns making those meals and bringing them to our house so we could figure out the rest of this new normal.    We also asked for a visiting nurse to come once a week to help with some more difficult medical issues that we couldn’t manage alone.

Here’s a recent example.  I was waking up at 2 in the morning, every morning, totally stressed.  I was worried about Wendy’s new medication.  Her new blood pressure pill looked exactly like her Vitamin D pill.  I was worried that I would accidentally give her the wrong one, which would be a huge mistake.  There had to be a solution to this problem, that would let me sleep at night.

I went to the pharmacy. The first thing I did was buy an alternate Vitamin D, one that looked completely different.  I also bought a pill counter, with a flip-top container for every day of the week. I bought one of those big ones that has four spaces for each day, color coded.  And I started putting all of her medication in there by time of day that she needed it.  That way, there was no worrying about dosage, or whether or not we had given.  Michael and I didn’t have to ask each other at 6 in the morning who gave the medicine  or leave each other notes saying we had given the medicine.  It was so easy it could be considered a no-brainer, but it helped me sleep at night and it only cost 30 dollars.  Later Michael and I wondered what took us so long to come up with that solution.

The truth is, even with our best efforts,  our good ideas don’t always work.  When Wendy was first sick I had decided that we needed a small fridge (our old college dorm fridge) for all of the medication and insulin, and to keep it in a different part of the house, because I didn’t want Wendy to get upset every time I opened the kitchen fridge and associate her insulin shots or medicine with food.  It lasted a few months before it seemed like overkill and it’s back to being a beer fridge.

Thomas Jefferson once wrote, “Eternal Vigilance is the price of liberty.”  I guess that’s true, the harder we work, in a smart way, the less likely Wendy will go back into the hospital.  And we work knowing that our vigilance keeps her as healthy as she can be.

(Pictured above, the day I decided to consolidate all of the medical supplies and put them in one place.)

One thought on “Normal is a Moving Target”