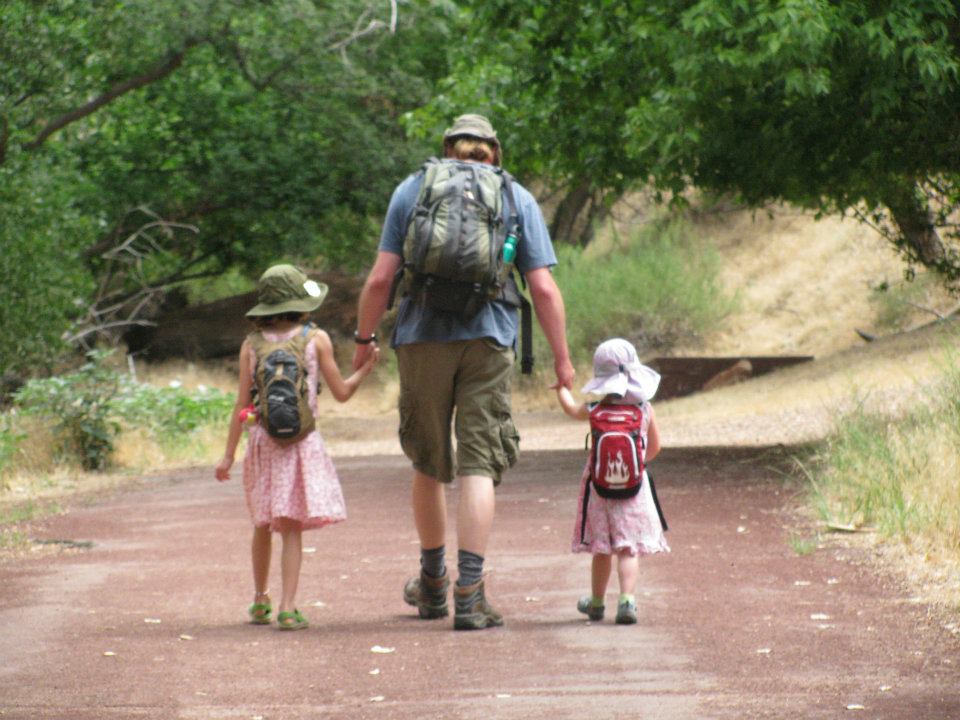 Father’s Day is a hard day for my husband, because it was on Father’s Day 2007 that Wendy first announced she had a stomach ache.  That stomach ache turned into a life threatening bacterial infection, that turned into cascading organ failure, sepsis, and an eventual kidney transplant, abdominal surgeries, and a variety of secondary diagnoses.

I can understand why he doesn’t like the holiday. But I wish he would get over it because he’s a kickass dad and we need to celebrate that.

When Wendy was in the hospital, over 200 nights as an inpatient, he spent almost every single night with her.  They had their own routine: They would walk me down to the entryway, come back, set up the beds, brush teeth, get in pajamas, and then read Harry Potter.  While in the hospital they read almost the entire series.  After hours they would sometimes go for walk in the hospital, to the PICU to see the fish tank, or to look in the gift shop window.  When I arrived in the morning with coffee, we would both stay to listen to rounds and then he would head back to our hotel room to take a nap, because honestly how much sleep did he honestly get on a tiny bed in a hospital room?

When Wendy was released, and the family still had to live in Boston to be close to the hospital, my husband looked for an apartment that we could afford and where I would be comfortable being there alone with her.  He found one that not only fit those requirements, but also allowed for a free shuttle back and forth to the hospital. Then he went back to work in Vermont, working three twelve hour days at work, and driving down to Boston for the long weekend, and to relieve me a little bit of the child care.  When he was offered a new job, even though he was worried that he couldn’t commit to it entirely because of Wendy’s health and said so, his boss said, “So you’ll be at 80 percent the first year, and you’ll make it up in the  coming years, I can live with that.”  And so, Michael took a new job as we waited for a new kidney.

When I found out I was pregnant with our second child, also while waiting for the new kidney, I was terrified of telling my husband, because I was scared that it was the one thing that would put him over the edge.  But he was so excited, so happy, that I couldn’t be that worried.  Ok, I was still worried.  New job, new kidney, new baby, in that order.

Now we’re in the present, with two girls who are relatively healthy and stable, and he goes to every sporting event, every recital, every activity.  He arranges the family schedule and sends me and Wendy our invites.  He is his happiest when he is watching his girls perform, especially sporting events, but also for music recitals and art shows.  Everything else comes second to those things.

I am lucky to have a kind and caring partner, who loves being a dad as much as this man does.  Our road has been bumpy with health problems and moves and changes of jobs, but he remains constant.  And so, I really really want to celebrate him on Father’s Day, even if he doesn’t want to be reminded of it, because it’s what started all the trouble, but in its own way, it also started all the grace and greatness of this man.

Happy Father’s Day to all the kickass dads, especially those who are fathers of chronically ill kids, or those who carry an extra burden as a single dad. The world doesn’t give you enough credit, but I certainly do.

I don’t know what I thought motherhood was going to be like so many years ago, but whatever I thought it was, I was wrong.

I recently ran across this quote from Joan Ryan, author of the book, The Water Giver:

A few weeks ago, I was fortunate enough to hear the remarkable story of Ario Nour and his family.  Ario had a brain tumor and had to go through a therapy that requires you to remain perfectly still with a mask on your face as you are put on a medical bed in a room, alone, while you have targeted radiation therapy.  It’s called proton beam therapy, and it’s necessary for little kids, to zap the tumor but save the precious brain tissue surrounding it.  As you can imagine, this can be terrifying and many children need anesthesia to undergo this treatment.  The problem is, this isn’t a one time treatment, it’s five days a week for many weeks.  That’s a lot of anesthesia.

Ario, at the age of seven, was very clear when he began his treatment:  he didn’t want anesthesia every day, he would find a way to stay still all by himself.  And he did.  The nurses and social workers were so impressed with him that they had an idea:  Maybe Ario could teach other kids to lay still too.  He tried mentoring another child. It worked.

And this peer mentoring program was born. Kids with brain tumors teaching kids with brain tumors what to expect, what to do, how to lay still.  To practice at home, before the treatment, kids try lying on the couch for increased amounts of time, often with something over their faces, like a washcloth or a spaghetti strainer.  They are allowed to listen to music, books on tape, or something else that will keep them occupied.

Then they get their mask specially made to form fit their face. They get to decorate it, and they use it every time they get treatment.

Other kids, after going through treatment and surviving, went on to mentor other kids.  They are proud to be the experts at something, and to show newbies who are sick and scared that they’ve done it and succeeded. That it was possible.

And the program grew.  It wasn’t just one kid helping one kid. It was a program.  Ario had started a peer mentoring program.

I got to hear him talk at the Family Centered Rounds at Massachusetts General Hospital for Children. Ario has had to go back three times for more treatments.  (Read:  He’s had more than one brain tumor.)  Now he’s in high school, and he’s a normal kid.  Smart, shy, humble.

His parents spoke too.  Not only do they support Ario’s efforts for the peer-to-peer program, but they also support and ride with him for TEAM ARIO, where they ride their bikes 50 miles in the Granite State Quest and raise money to fight pediatric cancer.  Ario and his family have raised over $300,000 and Ario has been honored as one of “The One Hundred.”  It’s a dinner that honors one hundred people at Massachusetts General Hospital who have worked hard to fight cancer.

As I listened to this story, truly an inspirational story, it’s important to remember, Ario isn’t cured. He has recurring cancer.  And his parents have this burden to carry, something no parent ever wants to deal with.  And yet, here they are, parents of a child who started a peer-to-peer program, who’s raised hundreds of thousands of dollars, and yet, who is still chronically ill.

I’m including the video of Ario here, for you to watch. Grab your tissues.

And take a moment to think about how your kids have changed you for the better.