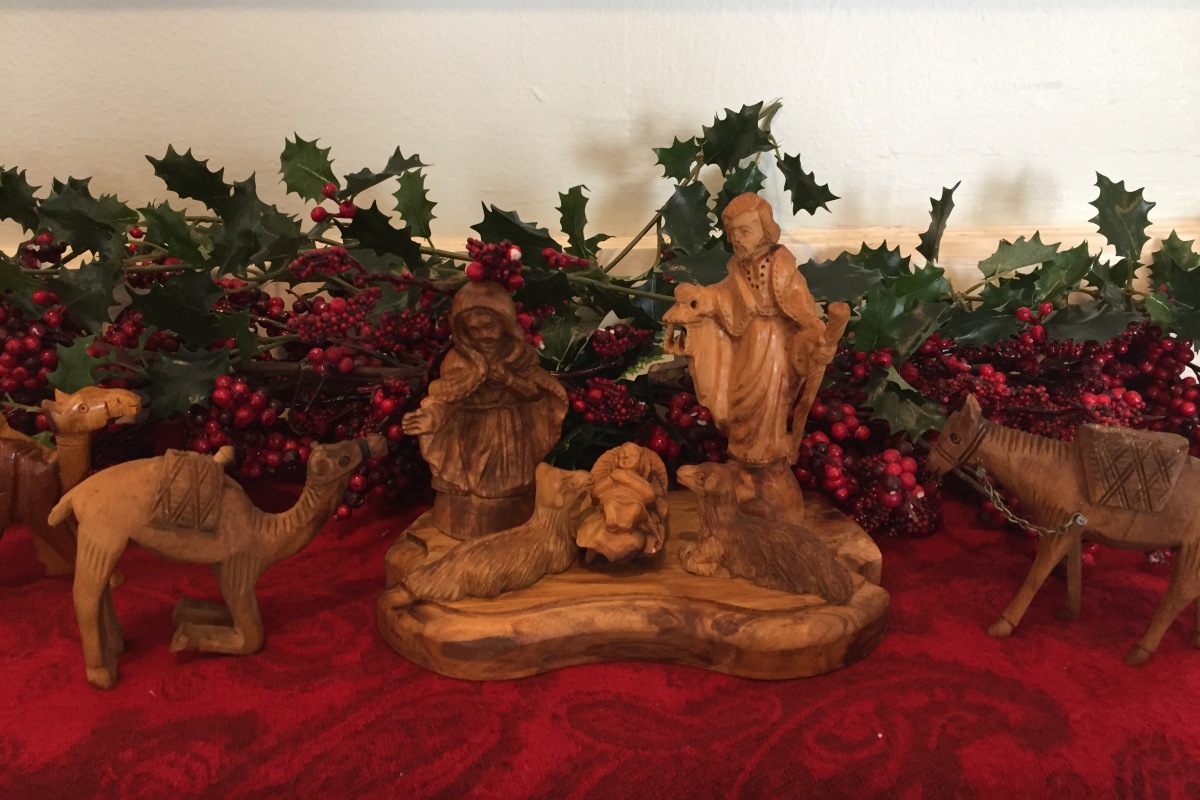 It wasn’t much to look at.

The creche was a simple creation of olive wood carved by an average craftsman.  Mary and Joseph, just a few inches high, knelt on either side of the baby Jesus already in the manger, all glued down to a single wooden platform.  Sheep lay down on either side of the manger and a camel and donkey were separate, meant to be placed along the sides.    Instead of golden colored and shining, everything in the box  was green and gray and slightly fuzzy.  We hadn’t taken it out for two years, and the box that held the pieces had apparently gotten wet and became a breeding ground for a devastating mold that had grown over the whole thing.

Michael and I looked at each other, not knowing exactly what to do.

My first thought was to just throw it out, it was beyond redemption, but I could tell by the look on Michael’s face that this revolting thing had to be saved.

It held sentimental value.  Michael’s grandparents bought it the year he was born in Jerusalem.  They had it all the years of his life in their small apartment in a retirement village in Westminster, Maryland.  When Michael’s grandmother died, I was pregnant with Wendy, and she had specifically said that we should have the crèche.  In fact, when we were cleaning out her apartment, it had a note attached to it in her shaky handwriting with our names on it, where they bought it and the year.

Michael’s grandparents were incredibly good with labels and history and legacies.

We hadn’t opened the box for two years because Wendy had been in the hospital the year before.   We spent every holiday in the hospital that year, but I will never forget the Christmas of 2007.  Wendy was so sick that the doctors wouldn’t discharge her, would only let us take her out for a few hours to our apartment two blocks away.  Everyone was released at Christmas, all the kids were cleared out except for the really hard luck cases.

Wendy was apparently one of those hard luck cases in the year of 2007.

The following year, 2008, we were gratefully at home.  Wendy was able to travel to Vermont, in the lovely snow, for a few short days and Michael and I were determined to have the best Christmas ever for her.  The e-coli had done so much damage that she was in kidney failure.  We were waiting for a call any day for a new kidney for Wendy knowing that it could come at any time, and Wendy, brave little soul that she was, continued to fail.

Yet, we were still so grateful to have her.

We were going to make this a happy holiday, because we didn’t know if she was going to make it to the next Christmas.  I traced Wendy’s hands and made a wreath with them.  She and I made bookmarks for everyone in the family.  We made tiny plaster ornaments and decorated a live Christmas tree.

And apparently, this crèche had something to do with all of it:  Michael’s grandparents and Wendy and happiness all tied together.  Somehow it became the symbol of the mission.

How do you clean a moldy crèche?

First Michael wanted to buff off the mold, and we found a spin toothbrush in the bathroom.  He went outside with a work shirt and gloves in the cold and buffed off as much as he could, then brought them inside.  We filled the kitchen sink with hot soapy water, we added some bleach and white vinegar and let them sit, where the glue became unbound and the figures floated to the top.

I remember thinking that the baby floating reminded me more of the story of baby Moses than baby Jesus bobbing in and out of the bubbles.

I scrubbed and scrubbed and scrubbed.   The soapy water covered my hands, my arms, splashed onto my forehead.  I was pregnant at the time, the time of my quickening, and I could feel little flutters in my belly.  I thought that maybe I should put on rubber gloves because I didn’t want the bleach to leach through my skin and hurt the baby I hadn’t met yet, but I already knew it was a little girl.

Joseph was the easiest, he had the least damage.  I put him aside on the red towel.  The baby Jesus  was next.  Floating in the water, I retrieved it and scrubbed it with the spin toothbrush, the whirr of brush making my hands a little bit numb.  Then came the animals.  The camel was in the worst shape, it needed to be scrubbed and soaked and scrubbed again.

Finally I set to work on Mary.  I really connected with her story as I scrubbed the likeness.  Pregnant, riding a donkey for days, giving birth in a stable, carrying the burden of this child and not knowing the future.  I thought, I’ve just got to work hard and get through all of this, Christmas, the kidney, the recovery, the baby.  So much to carry and no choice but to do it, because no one else could do it for me.

The scrubbing done, I had to think about what to do to make sure all the mold had gone away.  So I broke out the hair dryer and dried the pieces of wood, where they went from shiny to dull, dark to light, and they looked so very plain and ordinary, like a little kid had carved them from a scrap of wood.  Something had to be done to protect them, and I thought of olive oil.  The figures were made out of olive wood, so I thought that I could season them with olive oil.  I found  a small paint brush from Wendy’s Crayola watercolor set and sat down to paint the figures with oil and then let them sit on the paper towel to dry.

Needless to say, we had the most labor intensive crèche, decorating a desk that had been in Michael’s family for two hundred years, and I am pretty sure that Wendy didn’t notice it once.

It wasn’t our merriest Christmas.  Or maybe it was.  It was tender, and heartbreaking and gentle and sweet.  It was desperate and terrifying.

And yet it feels like yesterday. All the emotions come rushing back.

I am always reminded of this story when we pull the crèche out again and again,  every year at Christmas.  Christmas memories tend to be tied together, with the special items we pull out to decorate the house.

Happiness is tied into them.